What is a kirupa?

If you have any comments, feel free to post them below.

I am not an international criminal evading the law, but I certainly lived like one for most of my life. As you may be able to guess, I was born in India in 1984. I didn't live in India for very long, for at a very early age my parents and I moved to Italy where we lived on the island of Sardinia: 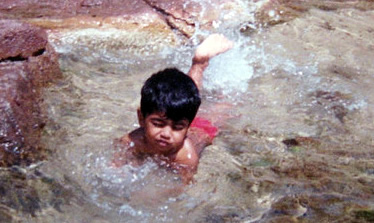 [ I loved swimming in deep water - look how happy I am ]

After a few years in Italy, my parents and I moved to Germany. There, I started going to school, was introduced to video games, fell in love with trains, discovered Nutella, got addicted to LEGOs, and had a stuffed yellow elephant that I took everywhere with me: 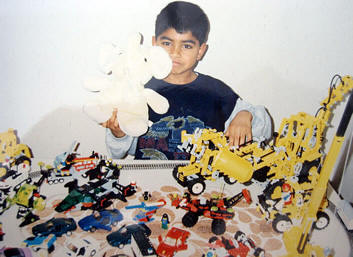 [ so materialistic...at such a young age too! ]

Germany was fun, but when I was around 7 years old, my parents and I made one last Passport-requiring move where we relocated to the United States. I've happily been in the US ever since.

For the most part, my life growing up was quite normal. I did the usual things kids did - watched a lot of TV, played a lot of video games, participated in a few sports, discovered the timeless music of The Bee Gees, and ate a ton of junk food. While many people may have grown out of some of these things, I am proud to say that I still actively maintain these hobbies even today.

At this point, while the digital version of me was spending countless hours playing video games, the analog version of me was doing the whole going to school thing and growing up in the Southern states of Tennesee and Alabama. Most young boys had dogs as pets. I had two awesome cats instead, Sugar and Skippy: 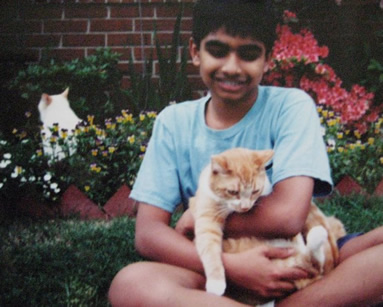 Besides school and my computer-related shenanigans, I partook in the typical Southern activities of learning to play the piano, taking martial arts (a style called Wado Ryu), playing golf (competitively even), and being an active member in the local 4-H club.

In 1998 I started this site, and that started taking up on inordinate amount of time once I really got into it. Keeping my online mischief separate from real-life got more difficult once I entered high school. During my sophomore year, McGraw-Hill noticed that I used FrontPage to create all of the pages that made up the kirupa.com web site. After some e-mail conversations, they eventually asked me to write a book targeted at teaching beginners how to use FrontPage.

After 6 months of thinking, typing, re-typing, and consuming countless cans of Pepsi, the final product hit store shelves and online book retailers in the summer of 2001. The following is an action-shot of the actual book: 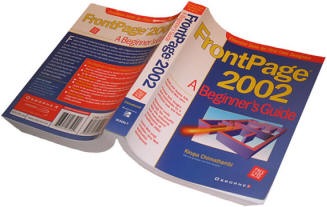 Your quest for finding the book may be slightly complicated because the book went out of print around the middle of 2003 – the same year I graduated from high school. A movie based on the book may be in the works, so keep on the lookout for a gripping historical thriller where 300 div tags face off against hordes of tables.

During and shortly after the book was written, I had to partake in the age-honored tradition of applying to colleges so that I could be a doctor, a lawyer, or a business executive. After taking the SAT and ACT exams a billion times and applying to a handful of colleges, I was accepted at MIT in the Boston area. I had nothing better to do for the next four years, so I figured I'd go check it out.

Life at MIT was fun. I learned to survive extremely cold weather without flinching, and I also learned how to balance work with more work: 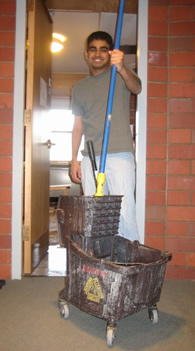 [ I liked to keep my dorm room clean ]

After four years, I graduated with a degree in Computer Science. Sad to say, I've forgotten almost everything I learned there. Happy to say, I met some great people there who I directly or indirectly spend a lot of time with even today.

Today, you will find me in the Seattle area working for Salesforce on the Lightning Design System team. Prior to Salesforce, I spent about a decade at Microsoft where I worked at the intersection of design systems, developer tools, design tools, and frameworks. My LinkedIn profile goes into more details about the professional-ish part of my lifel

When I am not at work, you'll probably find me indoors writing bios of myself, writing tutorials, playing video games, painting/sketching, hanging out with friends, watching movies/tv shows, listening to music, or trolling on the hot social networks of the day. Though, a larger part of my time is spent with my wife Meena (@codekunoichi) chasing our daughter (Akira) and cat (Pixel) around the house:

Some serious investigation going on here by Pixel and Akira! 📦

If you want to drop in and make a comment, feel free to do so below. I do read every single one and try to reply if necessary. Alternatively, you can e-mail me at kirupa[at]kirupa.com or catch me on Facebook.